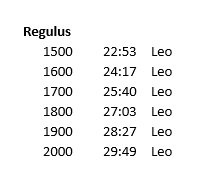 Sideral astrology is an astrological branch, which uses fixed stars for interpretation of e.g. natal, horary or mundane charts.

The fixed star Regulus can serve as an example. I have supplied an ephemerid of Regulus, which I have extracted from this site. As you can see fixed stars are actually not fixed - at least not fixed in the zodiac, where Regulus moves approximately 1 degree and 23' every 100 years. (Actually it is the spring equinox or 0 degrees Aries that moves.)

There are also great websites with ephemerids for fixed stars here and here.

So, if a person has the Sun or any other planet in conjunction with Regulus and within 1-2 degrees orbis, that person is attributed with certain characteristics from Regulus - here is an example, which I have copied from this site:

"Fixed star Regulus is of the nature of Mars and Jupiter. It gives violence, destructiveness, military honor of short duration, with ultimate failure, imprisonment, violent death, success, high and lofty ideals and strength of spirit, and makes its natives magnanimous, grandly liberal, generous, ambitious, fond of power, desirous of command, high-spirited and independent.

It may convey royal properties, noble mind, frankness, courage. The importance of this star is accentuated by its nearness to the ecliptic. Its effect is in the best sense that of Jupiter and Mars. When Mars or Saturn are in conjunction with Regulus, especially exciting events are always recorded e.g. assassinations, coup d’états, revolutions, revolts, demonstrations, overthrow of heads of state and similar events."

You can find more interpretations of fixed stars here.

Since the number of fixed stars is literally astronomical, it can be helpful to know that in the sidereal tradition 15 fixed stars are said to be more important than any other fixed stars - the so-called Behenian fixed stars, which Wikipedia has an article about here.

The general problem with sidereal astrology is that it is dificult to research, because it requires larger data collections than mainstream astrology. But with the research into male murderers charts I have actually got such a large collection. So far I have limited the research to the Sun and its conjunctions or oppositions with fixed stars, allowing a 1 degree orbis for the conjunctions and a 0.5 degree orbis for the oppositions.

The research results presented on this page stem from the birth dates of 5,040 male murderer's birth dates.

Table 1 shows the final result. The columns represent the following:

Let's see, what the astrological tradition has to say about Asellus Australis:

"These people have an aggressive nature, and will not take insults easily. They may, by their own lack of caution or by being dare-devils, put their life in danger, and will not hesitate to use brutal and violent means." (Elsbeth Ebertin: "Fixed Stars and Their Interpretation", 1971)

As for the "preventive" fixed stars there is no guarantee that they are particularly "fortunate" just because they appear in this table. For instance, Menkar is said to bring "impediments of many kinds" according to Elsbeth Ebertin. If a person is handicapped or ill, he or she is less likely to commit murder than a fit person is. Some of these "preventive" fixed stars seem to be completely unknown in the astrological tradition; that goes for e.g. Anunitum, Hasseleh, Avior and Azelfafage.

How this research was carried out

The research process in this project has been very bumpy, because I had to struggle to find a reliable research method. The Sun is moving, and the fixed stars are moving thanks to the movement of the equinoxes. When the data set spans over 170 years these movements require software, which has a certain level of sophistication.

All previously published research results were more or less flawed - they presented a picture, where the fixed stars appeared more powerful than they actually are. However, these promising research results lead me to invest time and energy into developing a tool, which very precisely can determine the influence of the fixed stars in a data set. The tool consists of several Excel templates, and with this tool I can scan the entire sky very fast to determine, which fixed stars are relevant in relation to a specific data set - and ignore the rest. Then I can scrutinize the relevant fixed stars and determine their strength in relation to the category.

Of course it doesn't matter what the category is. It could be business executives, politicians, artists, musicians, writers, journalists, alcoholics - or any other category. But it is a condition that the dataset consists of several thousand birth dates. If the data set is too small, then the outcome is not reliable.